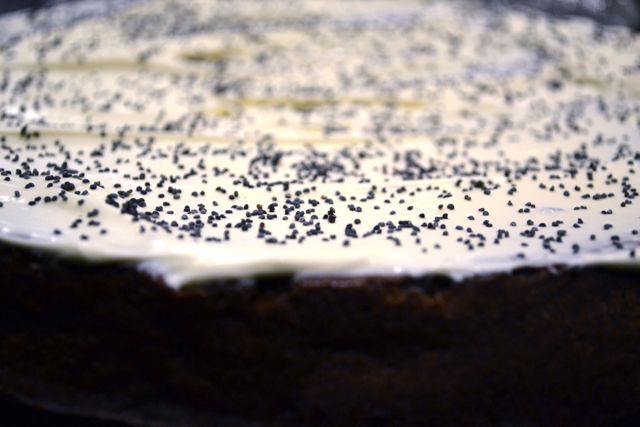 When I travel to my family’s house in Phoenix, the first thing I do after the pre-requisite hugs and kisses and how-are-you’s is pitch a tent (abet, a metaphorical one) in the kitchen and I do not leave until I fly back to New York. Or as was the case with the holiday break, drive off into the sunset in convertible, donned in a silk scarf and Jackie O glasses bound for a fab and fun vacay in Cali with the SO. I am not lacking for company in that kitchen. My mom and stepdad are always there with me trying out new recipes and whipping up old favorites. It’s certainly my favorite pastime – partly because opening the pantry is like taking a trip to Dean and Deluca, not to mention they have every pot, pan, spatula, knife and variation in between – but I love being able to introduce my parents to new recipes I have been loving. That was the case with this Moist Chocolate * Cake.

The * in the title stands for beets. Yes, beets. Aside from adding to the just-sweet-enough-taste, I reckon that the shredded beets keep this cake super moist. Plus, the color is amazing, like a deep red wine. I feel like ten years ago I would have had a hard time selling a cake with the likes of blood red root as a star player, but now both Cindy and Bob were genuinely intrigued by the prospect. I can only attribute this to local movement that has taken root in Phoenix, like most of the country, like wildfire. They buy organic meat and vegetables when possible, are finding alternative sources of protein to reduce their dependance on meat, and have joined a CSA. I knew they would be ready for this.

I don’t want you to be nervous when you see the bit below about beating egg whites until they are stiff. When I started experimenting with recipes involving this step, I was always extremely frustrated when my egg whites didn’t whip into “stiff peaks” but stayed rather foamy and flat. Then my parents found a source for local, pasture-raised organic eggs which they would receive in deliveries of 2 dozen eggs or more. They had some many eggs that we were struggling to use them up, and there’s only so many omelets a girl can eat. I took a risk and made a chocolate soufflé, which requires a boat-load of fluffy, voluminous egg whites and these eggs did not disappoint. With that being said, here are my 4 foul-proof steps to whipping up pro-worthy egg white peaks:

1. Use the freshest organic eggs you can find, preferably from the farmers market or a CSA, but I have also had success with supermarket organic eggs

2. Make sure that no eggs yolks leak into the whites, this changes the fat level on the eggs and they won’t whip up properly

3. Make sure to bring the eggs to room temperature – your egg whites will stiffen much faster this way

4. Use a high-powered hand mixer or stand mixer

Follow these steps and you will never be nervous about whipping egg whites stiff again. I am not sure how these fluffy egg whites play into this rich, densely textured cake, but it doesn’t really matter. The cake is delicious and I hope you enjoy it as soon as possible. This is definitely the type of thing you will be seeing more of at C’n’C – rich, decadent flavors by using healthy, whole-cooking methods. So yes! More beet cakes in 2012! Happy New Years! 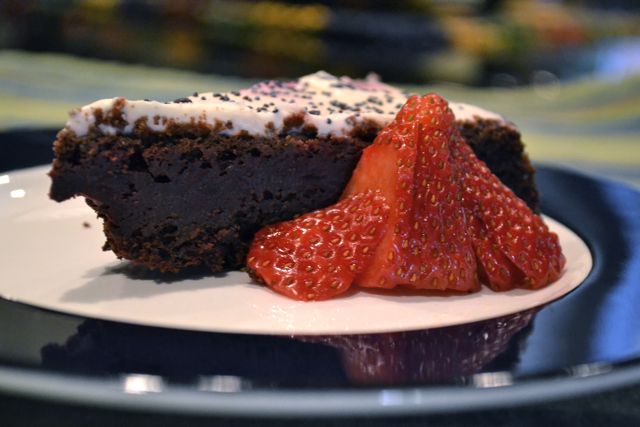 Adapted by David Lebovitz, from Tender by Nigel Slater

David Lebovitz says that this cake is better on day two and I would whole-heartedly agree. I would go as far to say as day three is the prime cake time. Wait to frost until you serve. I went with DL’s suggestion of crème fraîche and poppy seeds, which is delivious and I am not sure I will make it to trying out his other suggestions – ice cream and mascarpone.

3 tablespoons unsweetened cocoa powder (the darkest you can find, natural or Dutch-process)

Boil the beets in salted water with the lid askew until they’re very tender when you stick a knife in them about 45 minutes. Drain then rinse the beets with cold water. When cool enough to handle, slip off the peels, cut the beets into chunks, and grind them in a food processor until you get a coarse, yet cohesive, puree. (If you don’t have a food processor, use a cheese grater.)

In a large bowl set over a pan of barely simmering water, melt the chocolate, stirring as little as possible.

Once it’s nearly all melted, turn off the heat (but leave the bowl over the warm water), pour in the hot espresso and stir it once. Then add the butter. Press the butter pieces into the chocolate and allow them to soften without stirring.

Sift together the flour, cocoa powder, and baking powder in a separate bowl.

Remove the bowl of chocolate from the heat and stir until the butter is melted. Let sit for a few minutes to cool, then stir the egg yolks together and briskly stir them into the melted chocolate mixture. Fold in the beets.

In a stand mixer, or by hand, whip the egg whites until stiff. Gradually fold the sugar into the whipped egg whites with a spatula, then fold them into the melted chocolate mixture, being careful not to over mix.

Fold in the flour and cocoa powder.

Scrape the batter into the prepared cake pan and reduce the heat of the oven to 325ºF (160ºC), and bake the cake for 40 minutes, or until the sides are just set but the center is still is just a bit wobbly. Do not overbake.

Let cake cool completely, then remove it from the pan.