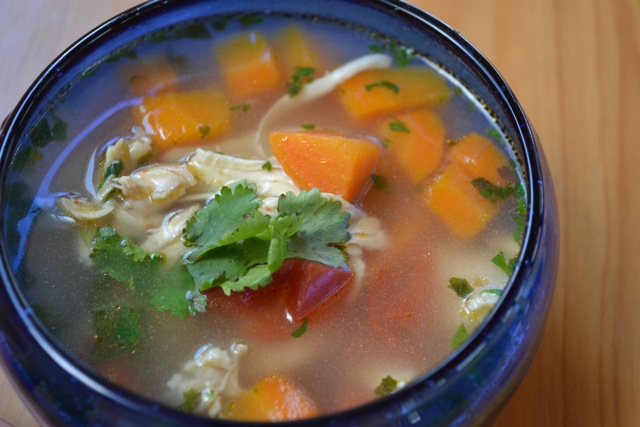 With the coming and going of Dia de los Santos, we are out of the rainy season (winter) and into the hot/cold season (summer) here in Antigua Guatemala. For the last three months, every day, starting at about two in the afternoon, clouds would roll in and for a bit, a beautiful rain storm would dance nimbly around Antigua and surrounding areas, wetting the crops and animals and people alike, cooling off the days a bit and cleaning out all the soot and dust. Now, with no such rain, the days remain beautifully warm, like a perfect day on the beach, and with little cloud cover, the nights are starting to become quite chilly.

I don’t think, having lived in New York for ten years, I will ever be able to call a Guatemalan summer “cold”. Cold to me is when you can’t wear just one jacket but  need to wear two, on top of your small thermal long underwear and your long thermal long underwear, your turtleneck, your sweater, your scarf and your hat. It’s thermal wool socks and needing to sleep with hot water bottles under three wool blankets. It’s minus zero Fahrenheit. That is my cold. But it does stay  mighty crisp here after 8 o’clock in the evening and before 8 o’clock in the morning. It is chilly enough that I don my thick-ish East Mountain Sport waterproof shell that, in another life, I used for skiing and have to shelve my black, rubber flip-flops that have become my uniform down here, swapping them for my only pair of Newyorkina boots with – gasp – a heel. And of course, it’s a time to start breaking out, at least in the evening, the heartier food fare to warm the insides on, again, chilly, nights. During the days, when the sun shines down on you and you can’t even imagine what a blizzard looks like, eating a soup seems pretty darn silly if you can eat a refreshingly cool and tart ceviche. But at night, it’s a different story. 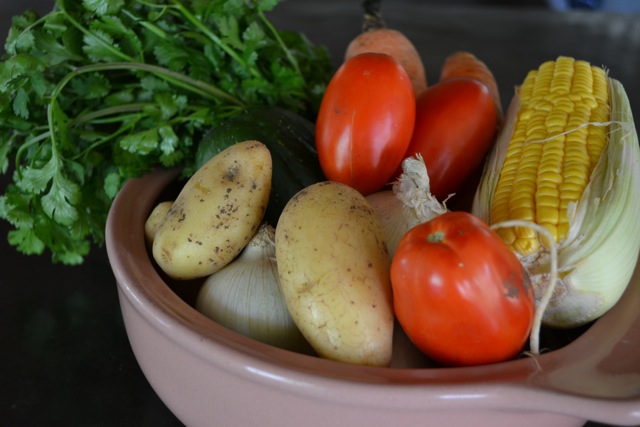 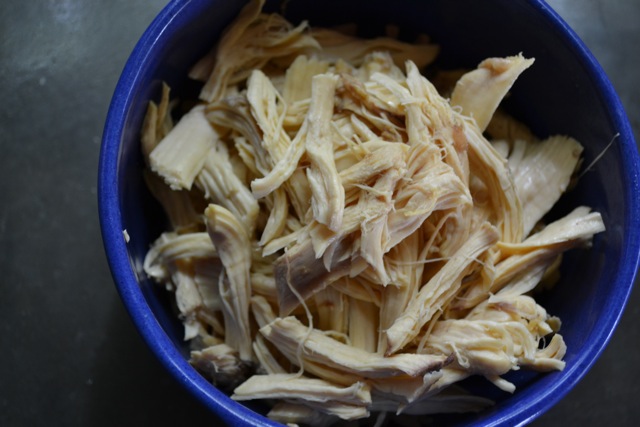 And now it’s fall everywhere else, Thanksgiving is around the corner and the time is for soups. Or in Guatemala, caldos. Guate has amazing caldos. Caldo de res, caldo de chipílin, caldo de fideos, caldo de verduras, caldo de gallina – all richly flavored with cilantro, mint, garlic, onions, oregano and sometimes chilies. Nothing is better for warming the soul than a caldo. It is also one of the easier things to make here as all of these ingredients are quite easy to find in either the market municipal or my local, tiny tienda, and I don’t tend to have the same fear of meat-buying when I am making soup. For these reasons, I eat soup almost every day. My favorite, at least that I know how to make, is caldo de pollo, or chicken soup.

Caldo de pollo is not very fancy. I wouldn’t serve it for a dinner party or to entertain in any manner (but maybe I should) and I hesitate to call it cooking. It’s quite easy. Stick everything in a pot. That’s pretty much it. In my first few attempts at this, the only real difference between caldo de pollo and a chicken soup I would make at home is some of the vegetables, like güicoy and güisquil, and the fact that Guatemalans serve their soups in bits and pieces, ie the broth in the bowl with pieces of chicken and fresh herbs, and then all of the vegetables and rice and such on a plate on the side so that you can mix and match each bite according to taste. But slowly, as I have continued to make it over and over again, certain elements have made it more authentic, more Guatemalan, and the main influence in this is Pascuala.

I don’t know if you remember, but a few months ago I alluded to a plan where I would find myself in close proximity to a beautiful and wise mistress of Guatemalan life who would teach me about comida tipica and help me unlock the many hidden secrets and ingredients and unknown spices which populate this incredibly fertile land. In my plan she was a squishy abuelita with colorful, flowing skirts, incredibly kind and giving, always quick to smile but never far away from swatting you on the behind when she needed you out of her way in the kitchen and genuinely knowledgeable about the land and the food in her life. Well ladies and gentlemen, I have found her. 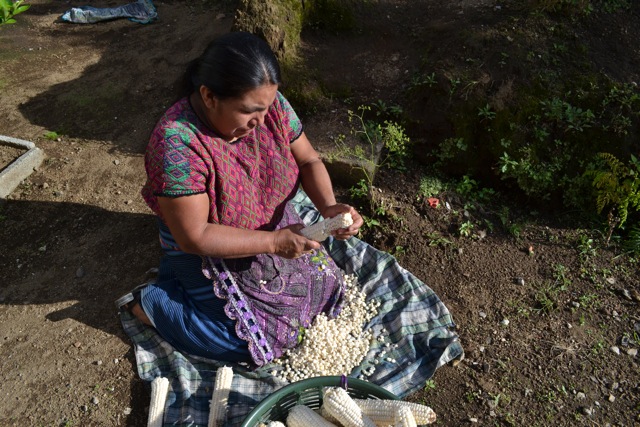 In truth I have found several, but none so authentic to my plan as Pascuala, the wife of the guard / groundskeeper at the San Juan house. She lives here with her husband, Agapito, and the youngest of their twelve children, Brenda, age 12. Her oldest is 34. It goes without saying she has a mountain of grandchildren. Her and Agapito have a family house in Santa María de Jesus, about 25 minutes up the volcano (haven’t said that before) from San Juan, where the rest of her family lives but these three live here with me, day in and day out, an odd, little multi-cultured family. At least this is how I see it. They most likely see it as they care for this weird, unmarried woman who seems to do nothing except type on her computer, cook and sneak into their kitchen to watch Pascuala do her cooking. This is not a description I am unfamiliar with. Many many women in India over my years of traveling there have had a similar reaction. But I am not discouraged, because I am desperately eager to learn from her, and most of the time she is so shocked I am interested in her cooking she is more than happy to oblige in giving me lessons.

This sometimes does not work out. There was a disastrous tortilla-making tutorial my first week here, where for 30 minutes she tried to coax a sleep-deprived, hung-over me to delicately pat masa into perfectly round discs. Mine turned out to look more like puzzle pieces and stuck to my hands when I tried to throw them on the griddle, but in no time she had a stack of 30 perfectly produced tortillas. She went off to have lunch and I skulked back to my bed, picking at the masa stuck in my fingernail beds with aggravated frustration.

And then there are the times her curiosity about my cooking gets the best of her. I cannot tell you how many times she has snuck up on me, either padding softly through the kitchen on feather light sandals or looking over at me through the kitchen window when I turn abruptly or look up and drop a knife or a hot pan or let something escape down the sink because I am so taken with momentary fright. Time and time again, I tell her to just walk in like a normal (read: loud, clumsy, things she is not) person, making noise and saying “hello” so that I know she is approaching and then she can sit and watch everything I do. But no, more often than not, some near-death kitchen experience happens when I look up and find her 4-foot-something frame silently hovering over me.

And then there are the times when everything works out perfectly. When I am game to learn and I am actually aware of her presence and things come together smoothly. Caldo de pollo is one of those times. She always comes in when I return from the market, no doubt interested to see what the gringa has purchased and on a day when she saw caldo ingredients, she whisked herself away hurriedly and I caught her out of the corner of my eye, running around the yard, snapping and snipping as she went. A few moments later she returned with several goodies for me – fresh mint from a planter on the side of the house, bright green stalks of chipílin and a few stalks of creamy white corn. 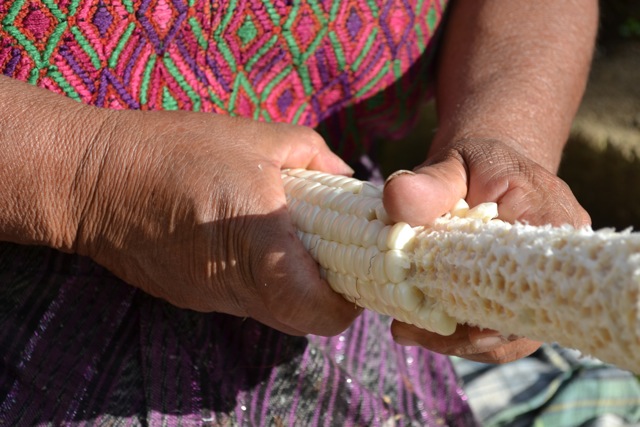 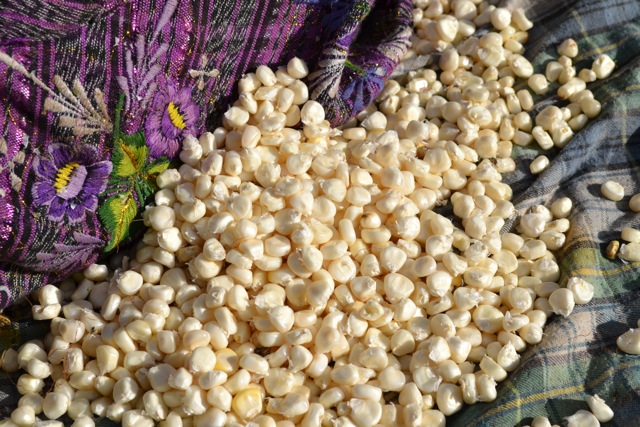 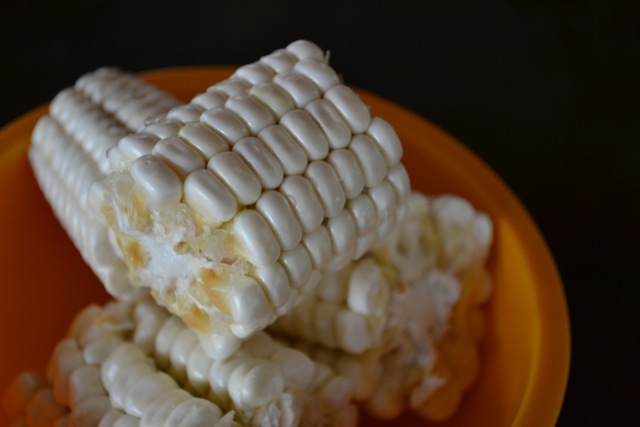 She gave me these things because she would use them if she were making chicken soup. Although not entirely common in the States, in Guate fresh mint is quite a popular accompaniment for chicken soup. Chilílin, a spinach-like, pungent green leaf that grows wild here, is also quite traditional in caldo de pollo. And the last, the corn, is not the kind of corn we extranjeros are used to. It’s known as feed corn in the States, what we would give to cows to fatten them up, make weird products like cat litter and playground equipment, or make high fructose corn syrup. Here, this corn is grown on small, family campos, or farms, much like the one Pascuala and Agapito work, and are rarely treated with chemicals or pesticides because of the cost involved. It’s toothier and starchier and cannot be compared to sweet corn from, say, New Jersey, but it’s very common down here and is not without its taste or healthy benefits. Everything – tortillas, atol, tamales, chuchitos, dobladas – is made with this corn. So when she made me this gift, I kindly put my mass-exported “American” corn away for another day and swapped in her great white ears of elotes.

Pascuala speaks broken Spanish and no English at all, as Katchikal (indigenous Mayan language) is her first language, but we manage to understand each other in the kitchen. Between pointing and gesturing and looking up words in the dictionary, the soup comes together and, by god, I may not ever eat regular old chicken soup again. The chipílin in pungent and biting, a good mix with sweet carrots and creamy potatoes and the corn is meatier, almost competing with the chicken for who gets top-dollar on the caldo bill. The mint is the real surprise though. Mint is not always my go herb, especially for chicken, but it should be. It brings out the sweetness of the meat without overpowering it. It was simply delicious. Pascuala, Agapito and Brenda thought so too.

2 large or 8 small potatoes, cut in half if using large

4 medium güicoy, cut in half

Put your chicken in a large pot and add water until chicken is covered by at least four inches. Add half of the onion, cut in two, and two whole cloves of garlic, peppercorns and bay leaf. Bring to a boil and simmer for 30 minutes. Remove breasts to a plate and reserve, boil remaining mixture for  1 1/2 hours.

In the meantime, slice other half of onion longways, so you have long strips. Add onions, carrots, potatoes, güisquil and tomatoes to the pot and simmer for 20 minutes. Add güicoy, cilantro, mint and salt to taste and simmer for 10 minutes more.

Pull out other meat pieces and shred along with reserved breasts and add back to the pot.

Turn off heat and spoon 1-2 pieces of each vegetable onto a plate, along with a big spoonful of rice and some lime wedges. Ladle broth into a bowl and serve with plate of vegetables and corn tortillas if desired. Enjoy!!