I should not be doing this…

I am huffing and puffing down Ocean Parkway in Brooklyn, sneakers on, music blasting, having a heated internal argument with myself, my mind pitted against my body. The Brooklyn Half Marathon is one of the biggest half marathons in the world, and a popular event with both New Yorkers and tourists alike. The first registration – 15,000 spots – sold out in under two hours. But the BK half’s popularity is no concern for my body. It is not happy, no matter how many people are running, but to be honest, neither is my mind. Of the two, my mind decides to be the ‘grown up’, coaxing and cajoling sweetly but firmly, and my body is the petulant child.

I didn’t have to run this race. If fact, I probably should have let it go for another year, one when it would have been easier. Easier has not been my go-to choice as of late, though, and every time I thought about dropping out, a big, black empty space dropped in my stomach like a boulder hitting cement. 13.1 miles is a long time to run, I had a loooooong time to think about all of reasons (rational or not) why I ran.

There is a lot of to say for memories. Memories keep us comforted when no one is around, they make us laugh and they remind us of happier times. But memories can also motivate, and they can meddle as well. Sitting in Guatemala in April, the race a mere month away, looking at an email from my friend Lindsey with information about a second wave of registration for the BK Half, I hesitated. Natalie, if we are being honest here, you haven’t run a half marathon since you were 25. You were much fitter then, not recovering from a sprained ankle and had trained for it for months.

These facts had little sway on my decision though. I signed up simply because I remembered that twice before I had completed two halves. I knew the ups and downs, I knew what struggles I would hit and at what point in the race. I had even run this particular half, my first, four years ago. Things had changed since then – my body is older and my list of injuries greater – but when I signed up, I knew I stood a fighting chance of finishing and finishing well.

I am not unlike a five year old at times. Most days my bedtime is before nine o’clock in the evening, playing in the sand is still my favorite pastime and like all children, I crave a sense of belonging with their peers. I am past the stage where I want to be and appear like my friends in every way, still, I crave that sense of belonging, an easy and unforced companionship with those I love. I have craved this even more since I moved to Guatemala, leaving a community of peers behind.

Shortly after I signed up, I found out an ex boyfriend would be running as well. This infuriated me to no end, as a) he refused to run when we were together, b) he started running almost immediately after we broke up, c) he was my fan club the last time I ran the BK Half, just a little more salt in the wound. Irrational, yes, but all the same, with less than a month to train and fully recover from a sprained ankle, my goals for the BK Half were clearly defined – finish the race, set a personal record for time, and beat my ex boyfriend. The last goal was clearly the most motivating, and I started training with vigor.

And then everything fell apart. A friend came to visit, and we started to travel. Training runs were nearly impossible at our destinations. Our developing–world locals left us with parasites (me), amoebas (her) and e coli (both). In the span of a day I went from being a fearless street-food eater to barely being able to keep down a banana. The antibiotics we took were strong and weighed on our bodies. Battling dehydration became an occupation, and the physical demands of restaurant work impractical with my new ailments.

But once I started, it was near impossible to stop. For many reasons, I kept running well into the race. Somehow, I ended up around to the 10K mark, the distance of my longest training run, and I decided to keep going even though my body was wrecked and starting to fall to pieces. My knees were inflamed and I could no long keep my gait up. I hunched over and moved my arms, willing myself to go on. The weeks of malnutrition and dehydration started to show, and it was only mile 6.

A dialogue started between my brain and my body at every mile marker, going something like this…

And so continued the race, every mile, until the end. But after mile 9, bragging rights lost their motivating effect and I started to consider throwing in the towel. In hindsight, this would have been the best decision, but there was something else in the back of my mind, motivating me onward.

Any tragedy where innocent people are hurt at the hands of those who are evil is awful, gut-wrenching and impossible to justify. But when I heard about the events on April 15, 2013, it hit closer to home.

Boston is not a normal marathon. If you want to run Boston, you have a to qualify by running a qualifying race within time parameters based on your age set by the organizers. The times are not easy for an average runner. To qualify, you have to be at the top of your game and run fast, faster than I could ever dream about running. Even my half marathon PR is light-years away from qualifying time for my age bracket.

After news hit, all I could think of were the runners who had trained their whole lives for Boston. Runners who pushed through broken toes and shin splints, who choose to rise at 5AM everyday for training runs rather than sleep in, who for months rearrange their whole lives to revolve around this one event, and then to have it taken away from them in a senseless act of violence… it wasn’t fair. Most didn’t finish; many were severally injured, resulting in amputations, and a few lost their lives.

It’s never fair with tragedies of this magnitude, but Boston seemed beyond cruel. Those next few miles, 10 to 12, the heroes and victims were with me, motivating to take every ugly step forward. Because I could, because there were many runners from Boston that will never run again, but mostly as my own small movement of solidarity. For every mile, no matter how tough the last one or how much I dreaded the next, I knew I would do it for Boston.

My friend Dave, another fellow BK participant, told me a few weeks ago that New York is a city of orphans, transplants from other cities and towns. Every single one of us chooses to be here, because living in New York is tough. Rents are high, jobs are demanding and competitive and a beer costs $8/pint. You don’t “hang out” in New York or stop over for a period on your way to your next destination. You commit to New York. You have your ups and downs, but for the most part, you choose New York as your home, and there are very few of us who leave.

But sometimes, you have to go. I had to go. Life gets in the way, and before you know it you are living in a city of 8.2 million people that feels too small for two. I wouldn’t say I felt pushed out, more that I felt suffocated, suffocated by memories and pain. It was a pain too great to drink away, a pain to great to hide from and too strong to push down. So I left to find space and balance. I left to see if there was anywhere else I could or would live. I left to see if I would miss it.

And I did miss it. I do miss it. Every hour of every day. I feel awful for the non-New Yorkers who have to listen to me brag about it. I relish times when I have fellow New Yorkers who understand. I can’t seem to stay away actually. Since leaving in July 2012, I have returned every three to four months like clockwork, greedily soaking up my favorite people and places. And if I am honest with myself, I have known since I left that one day I would return, stronger, happier, more independent and less cynical.

So as I lined up to start the Brooklyn Half, there was no way I was going to stop. New York is my city, Brooklyn even more so. I knew as I ran all over Brooklyn – starting in front of the Brooklyn Museum, running in and out of Prospect Park and finally down Ocean Parkway – I was never going to let New York down, and she was never going to let me fail. When I rounded the corner onto Coney Island’s boardwalk, stands lined with people and a DJ pumping top 40, I sprinted towards the finish line. My body, such a spoil sport the whole race, suddenly stood at attention and obeyed every command.

Crossing the finish line, I burst into tears. I tried to move to the sideline to sit down but my body was finally fed up with me, refused to work and instead fell backwards into a corpse position on the weathered, sandy boardwalk. Several organizers came up to me, asking if I was OK, as tears and snot and sweat dripped into my ears and hair. Yes, I was OK. Better than OK. On the top of the world, really.

I sat there for about a minute or so, sobbing hard. Tears of happiness and sadness and accomplishment and grief and hope. I cried for New York, for my ex, for all my friends running and the all those from Boston who will never run again. But as suddenly and sporadically my fit of tears came on, they turned off. 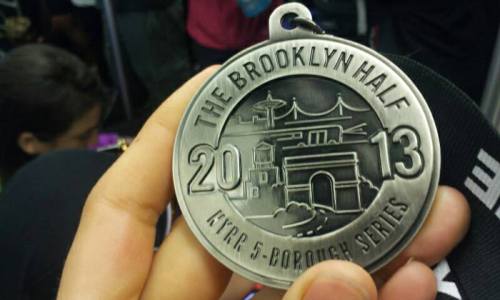 Lying there practically comatose, my body had one more question for my mind…

Body… Can I speak now?
Mind… Yes.
Body… Are you done yet?

Mind… No, and neither are you. Where are Linds and Kevin, Dev, Anne Laure and Dave? Are they done? Let’s find them.

3 thoughts on “The Brooklyn Half – Why I Ran”