Today I forgot I live in Los Angeles, and instead thought I was back living in New York. I’m not sure if it was the heat wave we’re experiencing (can you call it a heat wave if it only lasts one day?), or my Sunday routine, but something about today put my mind and body squarely back in Brooklyn. I tend to do this when I walk a lot in LA. Walking is such a commonplace thing in New York, a downright necessity if you want to go anywhere, ever. Not so in Los Angeles. You can go from your house to you car to you office without having to take more than 25 steps. In New York my friends and I would walk five miles home just because it was a nice day outside. In LA, if you walk more than 90 seconds, people give you funny looks. As my friend Dev says, “If you walk in LA, people think you’re homeless”. But the whole all-driving-all-the-time thing in LA doesn’t really suit my inner New Yorker, so today, at 10:30 am, after my smart-doohickey thing said it was only 80 degrees outside, I decided to walk 45 minutes to brunch.

In NYC, I had weather patterns memorized. September, October and November were crisp, December through March depressingly cold, April and May a blessed relief of mild days and fresh bloomed flowers, and June until August were a hot, sticky hell. But I liked it. Not being keen on winter, I loved when Brooklyn was so hot that clothes, if needed, were so flimsy they were almost for decoration rather than modesty. Skin was the new black, and brows and necks were slicked with perma-sweat. If you were unlucky enough to have to descend into the bowels of the New York City subway system to get from point A to point B, you sighed sweet relief at the putrid, stale air that whipped through the station when the trains arrived. New Yorkers during heat waves banded together and kept their distance at the same time. Dropping their frosty exterior, New Yorkers would exchange looks of sympathy with you during particularly muggy days, as if to day, “I feel ya, girl”. That same New Yorker would then shiv you to get to the ice cream truck first or take her rightful place into front of the air conditioner.

I don’t feel like I am an expert at LA weather yet. In all fairness, there’s not really a need to be a weather nerd here in LA, since 95% of the days here are sunny and mild. I admit it’s a bit boring, weather here, but when faced with frigid winters out east or day after day of sunshine, I’ll take boring any day. I’m so used to the monotony of the weather in LA that I’ve become a little reactionary when the weather turns less-than-perfect. It’s like there’s a mini me inside my brain whining – but what are we going to dooooooo?? – while she paces and whittles away at her fingernails. In December there was one week when the daytime temperatures dropped below 50 degrees. Having thrown away or left in storage most of my winter clothes, I impulse-purchased a $300 wool coat online thinking, “Ok, this is it. The long, cold LA winter’s arrived”. That coat is still in the plastic wrapping it was packaged in when I took it out of its box. When the weather is hot like this, I troll thrift stores for crop tops and try to avoid the urge to make all my jeans cutoffs. Hot days here not spent at the beach feel a little lonely, because people tend to suffer in their cars with the AC blasting. I don’t think people thought I was homeless walking around this morning. I think they thought I was crazy. 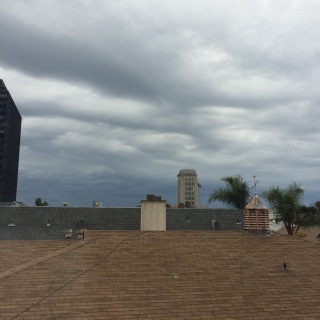 Soon after I set out, my short shorts chaffing the insides of my thighs and sweat dripping down my neck where it pooled in my bra. I found myself crisscrossing streets to stay in the shade of buildings and trees. I checked the weather app again – it had climbed to almost 90 degrees. The New Yorker in me would be continued to struggle, but she gets very deflated when she sees all the people driving around in their icy BMWs and Audis. There was no one on the streets to commiserate with, so I did what any logical Los Angeleno stranded without a car would do – I called an Uber. In typical Los Angeleno fashion, he arrived with his AC blast and the windows rolled down. I gracefully requested to be sat inside for brunch and then ordered an icy cocktail. At home, I turned my AC on for only the second time since living in Los Angeles. Tonight I will drink frosty rosé and eat salad because it’s too hot to cook. My neighborhood doesn’t have ice cream trucks, so I might venture out of my house later in search of a very Los Angeles hot-weather tradition, Pinkberry. Although as I sit at my desk writing this, I’m watching gray clouds roll in from the ocean and hoping the rain will cool this parched city, and tomorrow Los Angeles will go back to the temperatures I know and love.

1. Toast 1 cup whole or halved cashews in a large skillet for ten minutes on low, stirring often, until brown and slightly burnt in places.

1. Wash and dry one head of kale and tear into pieces. Toss with one tablespoon lime juice and let sit for 10 minutes.