I read this news article the other day about a group of women knitters in Virginia who are shipping yarn and other knit-worthy materials to a group of soldiers in Afghanistan called the Combat Knitters. The Combat Knitters knit their wares in the midst of an ever waxing and waning war and use their needles like soldiers in Vietnam used cigarettes and poker – as a distraction from the daily life around them, the hardships of battle, the seemingly endless waiting for the next mission, the next deployment, or the next bomb. The full article can be read here but this excerpt particularly struck me:

The Combat Knitters tote their yarn and needles in nondescript pouches, sneaking a few stitches here and there, under their desks, between shifts, after saving or losing a patient, waiting for a rocket attack to end, watching F-16s taking off from the airfield. Wrists piston and needles click as the knitters watch a Friday-night movie projected on a barracks wall under the black sky of southern Afghanistan.

The story goes like this – right as she was starting to dabble in knitting for a wrist injury, Lieutenant Commander Jenn Almy met another soldier while training at Fort Dix in Virginia who’s wife, Kathleen McCarten, was a knitter. The two women remained in touch after LCDR Almy was deployed in Afghanistan where she had the idea to teach others knitting skills and launched a project as a way to make learning less daunting – knitting a large American Flag afghan out of patches knit by newbie Combat Knitters. Almy’s students would only have to knit 8×8 inch patches while being able to contribute to a bigger project. This is where Mrs. McCarten comes in. She enlisted her local knitting community and several yarn shops to help her send needles, yarn, patterns and moral support to LCDR Almy on the front lines and her band of knitters who at the time of the article are almost done with the afghan. (You can read more about Lieutenant Commander Jenn Almy, the Combat Knitters, and her American Flag Project here.)

This article made me think not only of my own start in knitting but about all of the ways that knitting creates community in my life and in the lives of every knitter. Think about the way someone starts knitting. Very often they don’t just pick up a set of needles, look at a book or website or online video and just start knitting. Most of the time there is another person involved, usually a mother, grandmother, aunt, or friend bursting with knowledge about gauges and circular needles and the neighborhood gossip. I was graced with the opportunity to learn to knit twice – once from my Nana Cleo who, with her Avon-soft hands and piercing eye for detail, meticulously watched my 10-year-old fingers move yarn to and fro on metal needles correcting me when I dropped or added stitches. My second round of education came when I was 22 from my Aunt Susie (aka my Knitting Guru) who dropped all of the latest knitting knowledge on me about bamboo needles, artisan and organic wool, and helped me to create my own patchwork afghan.

From these early experiences I was able to create my own global knitting circle similar to LCDR Almy’s with women from the US, Canada, and my mommies in India at Sri Ram and expand my skills as a knitter. My Indian mommies have me starting on baby sweaters and always save me in tangled-yarn emergencies, my lovely Andrea didi in Canada who embarked on the “Indian Hat Drop Project” and my Brooklyn yarn circle that is getting bigger by the day. Just the other day I was at an Etsy Labs Meet Up in Brooklyn with a number of other women, many knitters, coming together to knit, share skills and patterns and yarn, but also to talk, to connect with others, to unload about their days and get advice on issues in their lives. Knitting for me is a therapeutic outlet to escape from troubles and focus my mind on something else, something that is right in front of me that doesn’t have keyboards and can’t be tweeted or digitally “liked”. Knitting requires my near-constant attention so I don’t drop a stitch or knit when I should purl, and ruin the whole piece I am working on. And while I am positive the troubles I face in my life cannot compare to those that the Combat Knitters deal with on a daily basis in Afghanistan, knitting provides the same benefits for me as it does for them. In their world full of destruction and death the Combat Knitters get a chance to create, to build, and to focus, if only for a few moments, on what is right in front of them and allowing them comforts of home. 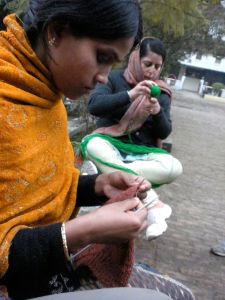 4 thoughts on “Knitting on the Front Lines in Afghanistan”